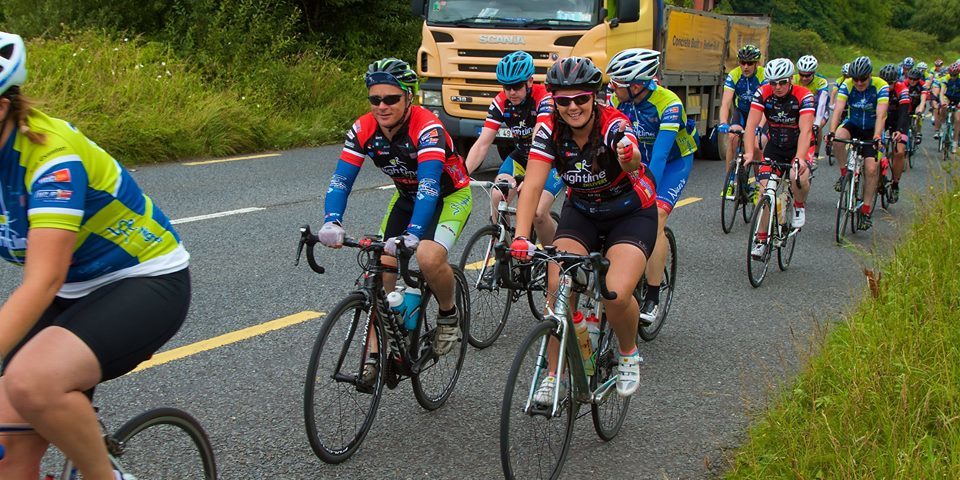 As I waited on Patricks Bridge along with 125 other amateur cyclists I was filled with mixed emotions. The Hill was filled full of supporters, banners, flags and shouts of encouragement all accompanied by the pipe band belting out songs of support.

I tried to block it all out as I reflected on the last 4 days so I could try and suppress the overwhelming feeling of nausea at taking on the iconic Patricks hill – on my BIKE!!

The past 4 days had been filled with many highs and lows, from sing songs at the Down Syndrome Center in Limerick, to tears of pain as I crawled at what felt like snail pace up the O’Connor pass in Dingle, my speedometer clock no longer read zero but 640kms. We had made it and had arrived back in Cork!

My thoughts were interrupted and I was brought back to reality with a bang as the whistle went and it was game on!! Patricks Hill here we come. What was all of this for? Simple. The Tour de Munster.

A four-day bike event that touches all 6 counties in Munster. It doesn’t matter if you are 16 or 96, an expert cyclist or a rank amateur – everyone is welcome to participate.

2017 was the 17th edition of the tour which to date has raised over 2million euro for charities.

It is now the biggest single annual fundraiser for all Munster Branches of DSI and has enabled the provision of essential therapy and services which would otherwise not have been provided to people with special needs. This year riders were also welcomed to also promote a cause of their choice. McKesson and NorthStar were a huge support throughout my training and it was fantastic to come into work after a tough training session in all kinds of weather to be greeted with ‘how did it go’

The Tour caters for all ages and types of cyclists, and as he has for the past 13 years, cycling legend and Irish National Treasure Seán Kelly cycled beside everyone. It’s great for PR and I can personally say a huge motivation when I had the pleasure of being in his company for a few kilometres as he shared some of his cycling experiences suddenly a few more kilometres had passed and it was time for a stop! Sean is an integral part of the Tour de Munster.

For me the tour was a cycle, a challenge and an achievement. However, for others it was so so much more. Most of the 125 cyclists had a personal connection and for them this was far more than a cycle but a cause to change the life of a loved one.

My journey gave me a chance to see the great work that Down Syndrome Ireland do. All along our route we were met by members of DSI who encouraged, fed and entertained us with their very special abilities.

I learned that funds raised have

What I experienced is so difficult to describe. The comradery of other cyclists when you think you can’t go on, the slap on the back that gives you the encouragement to keep pedalling.